Once again I find myself back in the Valley. A place with big walls that tower like giants and free climbs that inspire the imagination of generations. But Yosemite is also the scene of horrific crowds, mind numbing traffic, and substandard camping. As big as the park is, sometimes the Valley can seem downright claustrophobic. And then of course there’s the plague. That’s right, there’s an actual plague in Yosemite. Hantavirus is carried by rodents in the Valley and has killed a number of Yosemite visitors. Beyond that, the bathrooms are often disgusting and the campgrounds overrun. This week it seemed that everyone in Camp 4 had some kind of flu. With lines at 5am to get a site, people sleeping on the ground curled around camp fire embers, and everyone sick, it’s hard not to think of this place as some sort of refugee camp. And in a way, I guess it is. People from all over the world flee the comforts of modern civilization in order to share in the majesty of this place for a short while, regardless of the downers. 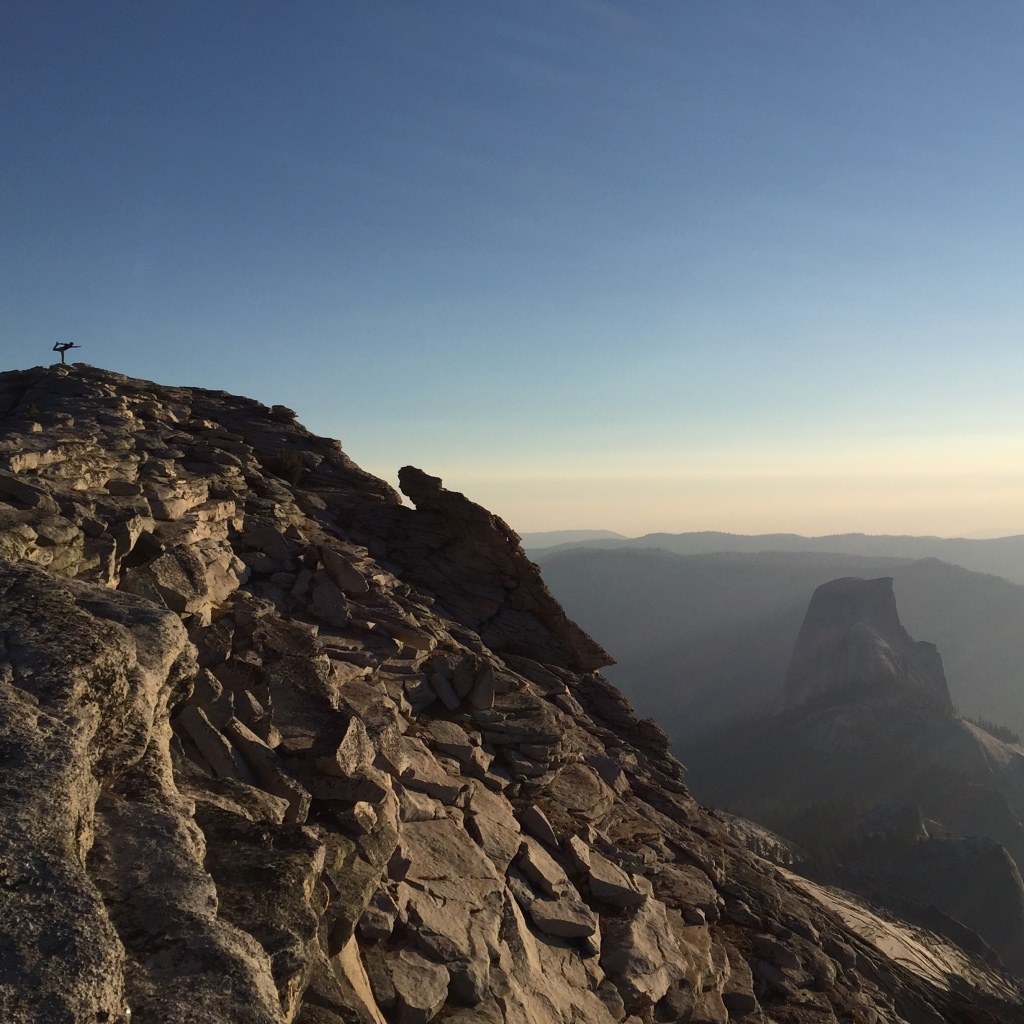 I’ve spent a considerable amount of time in Yosemite at this point. Having done a few of the big walls and tons of free climbing I feel well acquainted with the place. The only routes left to do are all hard and most of them involve some sort off-width skills. Wide cracks are by no means my forte, but the double-hand-stack/knee-jam has become my new go-to skill and I’ve gotten better at it in the past few weeks. It’s times like these when I wish I had spent more time getting dialed on Black Crack back home!

Most of this leg of the journey was spent with Ryan Richardson, a nice guy I met randomly in North Conway one day. Ryan’s on his own climbing adventure and has spent the majority of the season in the Valley. We choose My Favorite Things (5.10a, 15 pitches) as our first outing together. Most of the climbing on this route was fairly moderate, but the overall experience was quite demanding. The Mountain Project description says it best, so I’ll simply quote. “With a 6 mile cross country approach, 2700 feet of climbing, 1200 feet of 3rd to the top and 7 miles back to the car, it is a burly, but rewarding day.” To be clear, the cross country approach involves tons of bushwhacking, boulder scrambling, and a 1.5 mile 4th class traverse across open slabs. The start of the route was nearly impossible to find, a small cairn behind some bushes, above 1200 feet of chossy slab was the only marker. We got lucky and followed a party ahead of us who knew where to go. The climbing itself turned out to be only so-so, but the view of the High Sierra from the route is unparalleled in the Valley. After 2700 feet of climbing we unroped and scampered up the last 1200 feet of slab to the top of Clouds Rest. Every climber who’s ever driven through Toulumne has seen Clouds Rest. It’s that craggy peak you can see from Olmsted Point, perched above massive granite slabs that stretch endlessly into the Valley. The view of Half Dome from the top was one of the most impressive sights I’ve ever witnessed and it really brought the whole experience into focus for me. 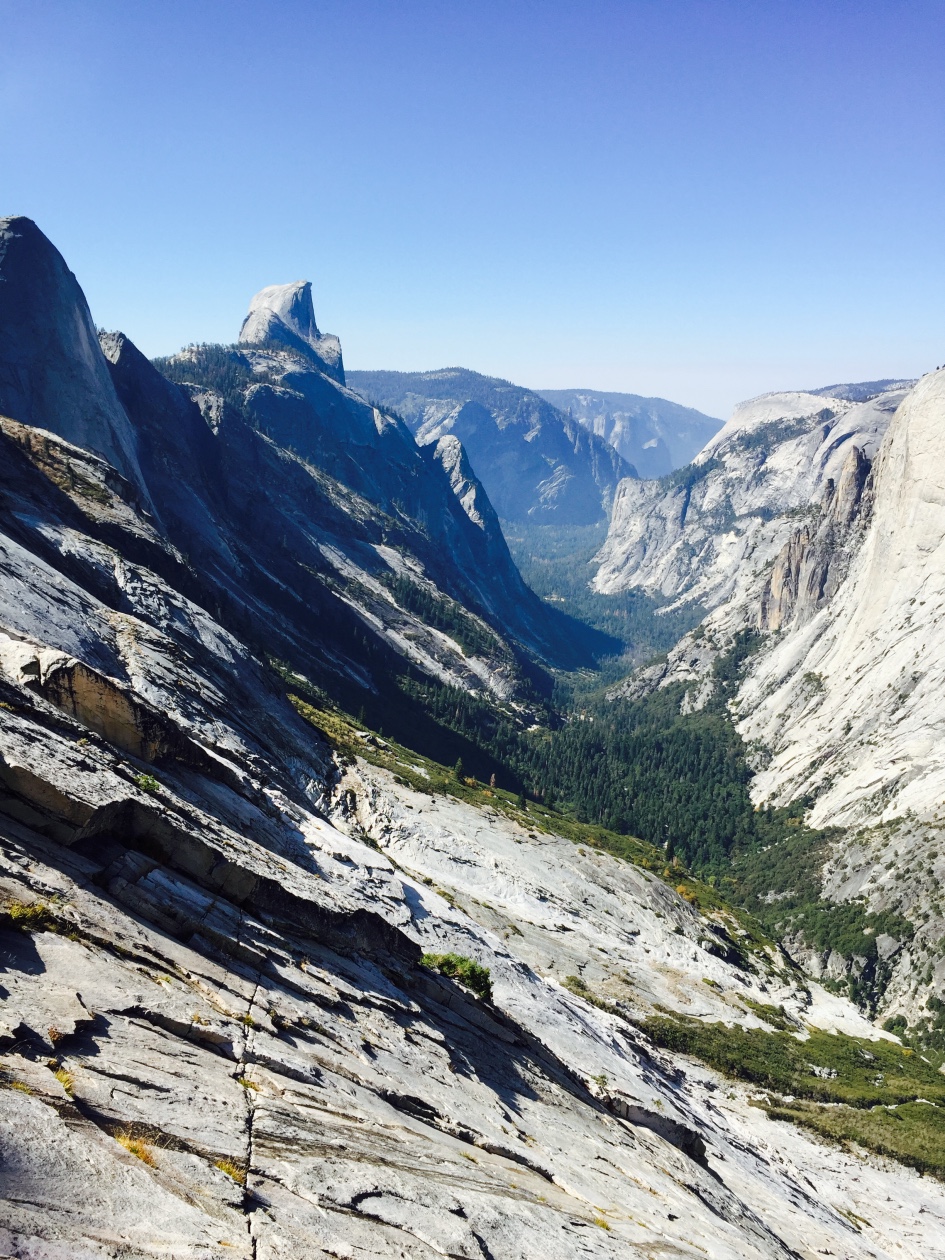 After a rest day, Ryan and I jumped on Serenity and Sons (5.10d, 9 pitches), one of the Valley classics. Despite the enticing crack climbing, I’d avoided this route for years because of the notorious first pitch. The bottom 90 feet of this route were once used for aid practice, years of placing pitons in the same spots had widened the thin seam to the size of a #1 Camalot. These piton scars do not take gear. Despite what you may think, offsets and tricams just do not fit. You may be able to finagle them in, but I’d place little-to-no faith in their ability to hold a fall. Most people simply run it out for the first 30 feet or so on 5.9/5.10a terrain. Eventually you get a bomber #0.75 and the tension starts to ease off. Beyond the fear factor, the first pitch is also remarkably painful on the feet. Even the great Alex Honnold has commented on this. The piton scars are widest in the middle and taper down to a fine point at the bottom, so all of your weight is literally pressing your toes into a constriction. I sent the pitch and was happy to get it over with. I also got the crux pitch but fell once when the crack shrank down to tips and the feet disappeared. The rest of the route is mostly 5.10a and went pretty smoothly. Overall it’s a fantastic climb and now one of my new favorites in the Valley! 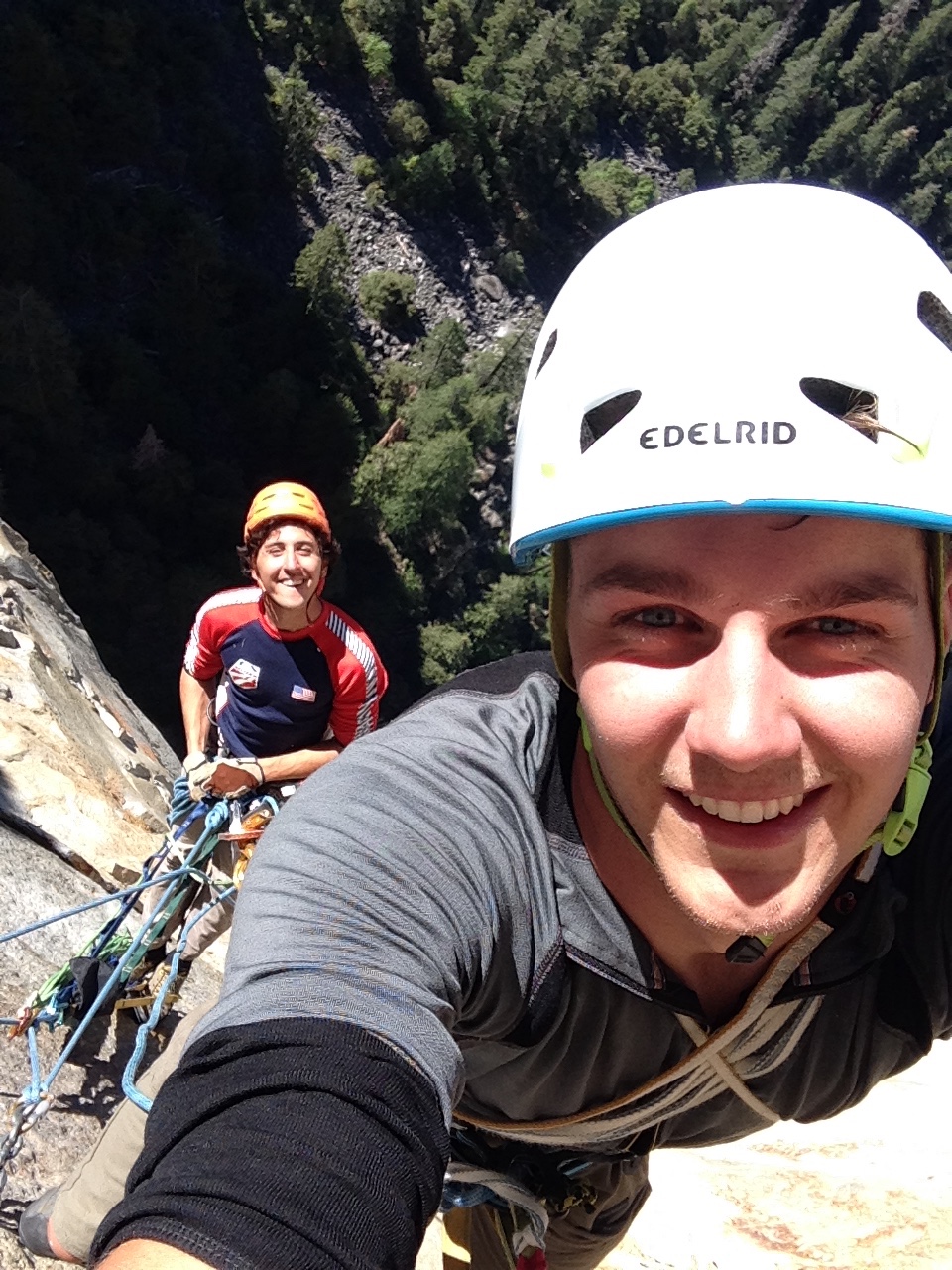 Ryan and I got it into our heads that we wanted to do a big wall in a day. Once the idea was sparked it was hard to deny the appeal. We choose the West Face of Leaning Tower (5.7 C2F, Grade V). Normally this route is done with a bivy, but if you don’t have to haul a bag, doing it in a day is quite reasonable. We started hiking at dawn and got back to the car at about 10pm. It was a long, but fairly uneventful day. 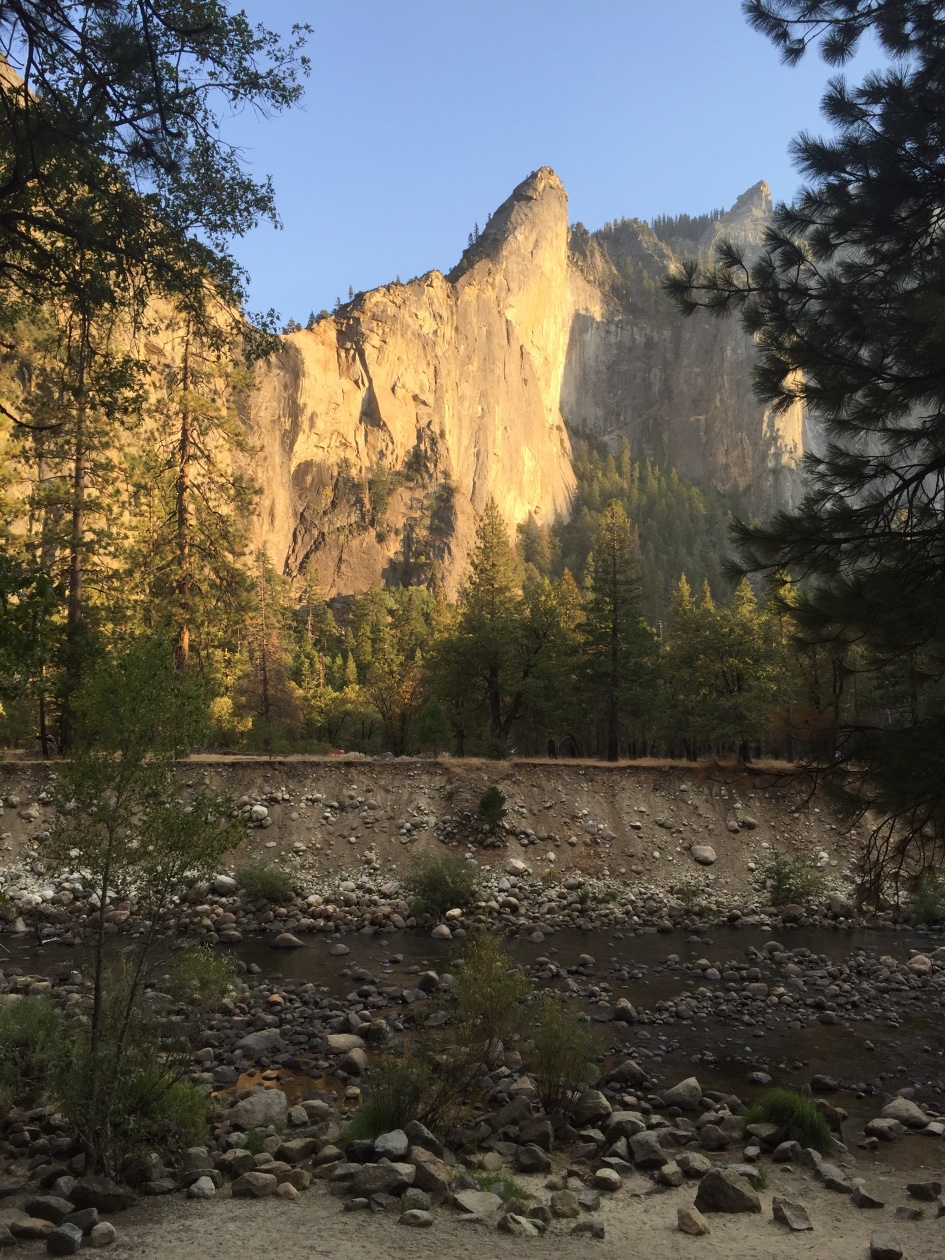 I don’t know why people complain so much about hauling the bag, it seemed pretty easy to us! 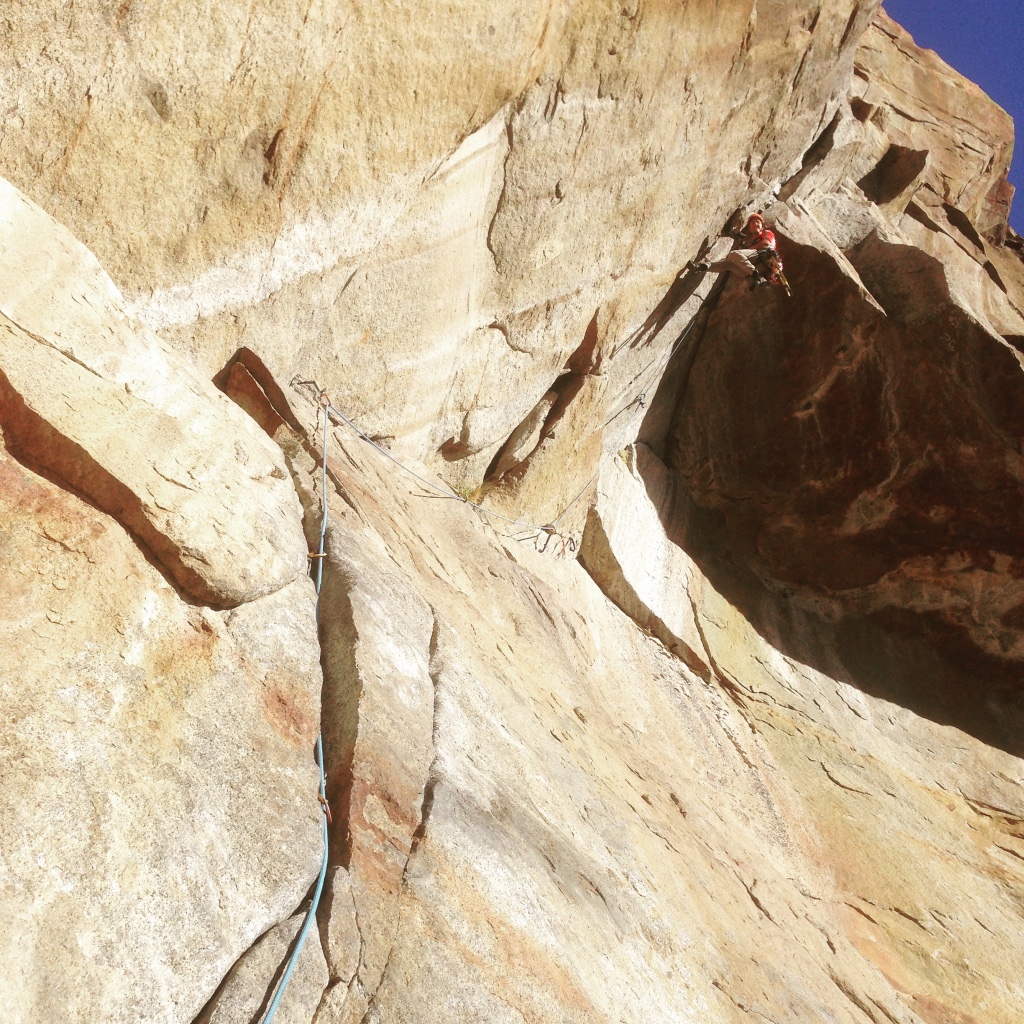 Our last climb together was The Rostrum. This thing is stacked with pitch after pitch of some of the best free climbing I’ve seen anywhere. Every pitch is excellent, but three stood out in my mind as phenomenal. Pitch 3 is a 160 ft 5.10b hand and fist crack that goes through a roof before tapering down to some techy face climbing to a ledge. Pitch 5 is a 100 ft 5.10d layback through a roof. Plug a good cam under the roof and fire it 20 feet to the anchor with your eyes bugging out of your head. Pretty pleased with myself for on-sighting this pitch, BTW. And pitch 7 is a long 5.11b fist to thin hands crack that tapers down to a cruxy finger crack. The entire pitch is slightly overhung, which just wears you down. From hardest pitch to easiest, the whole stackup is 5.11c, 5.11b, 5.11a, 5.10d, 5.10b, 5.10 OW, 5.9 OW, 5.9 chimney. Pretty damn stout. I’d love to go back and send it in a single push. Ryan red-pointed the route and flashed the crux pitch (some pre-placed gear), which was super impressive! We also met Gabriel and Ed, a couple of rad Euros who we got to enjoy the day with! 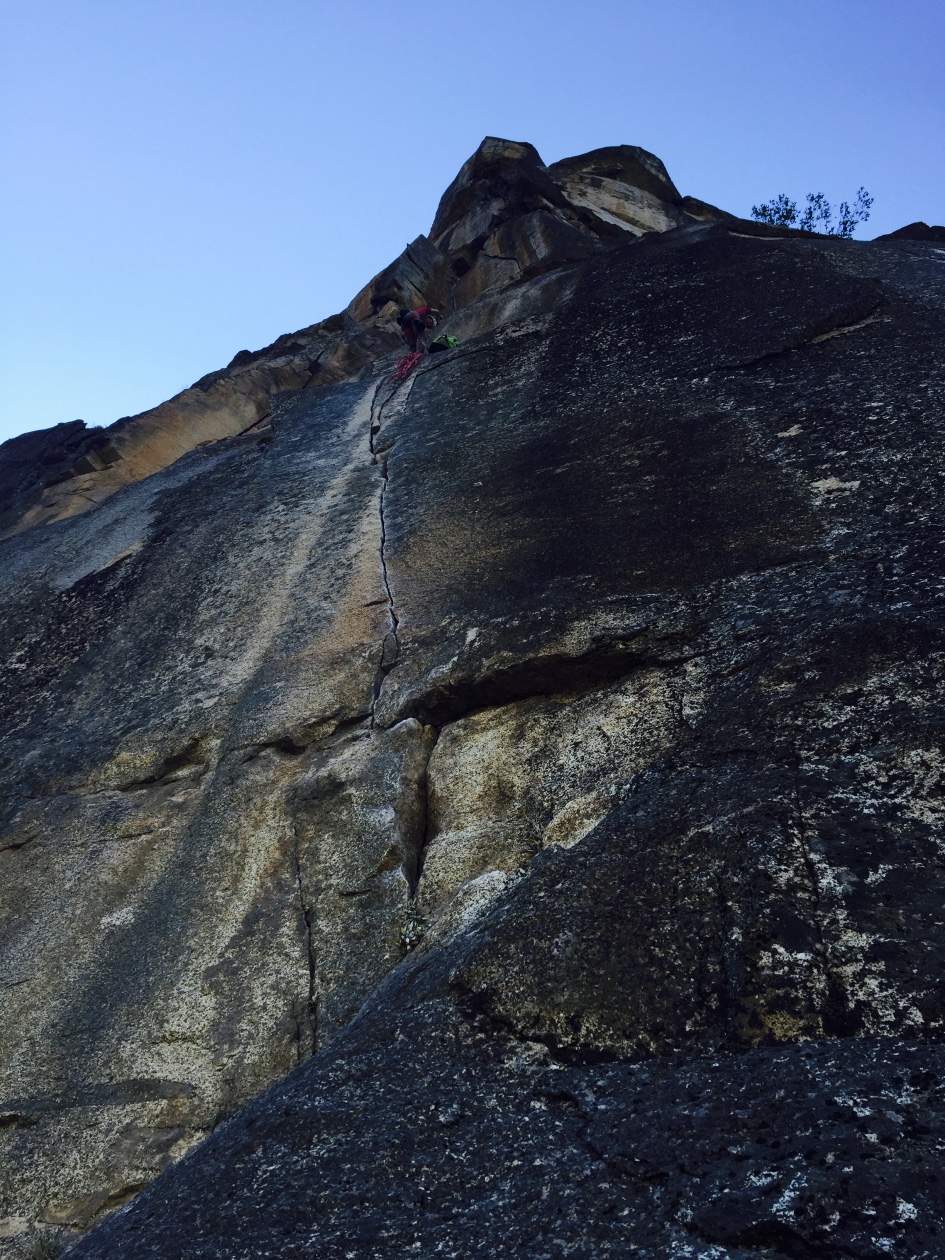 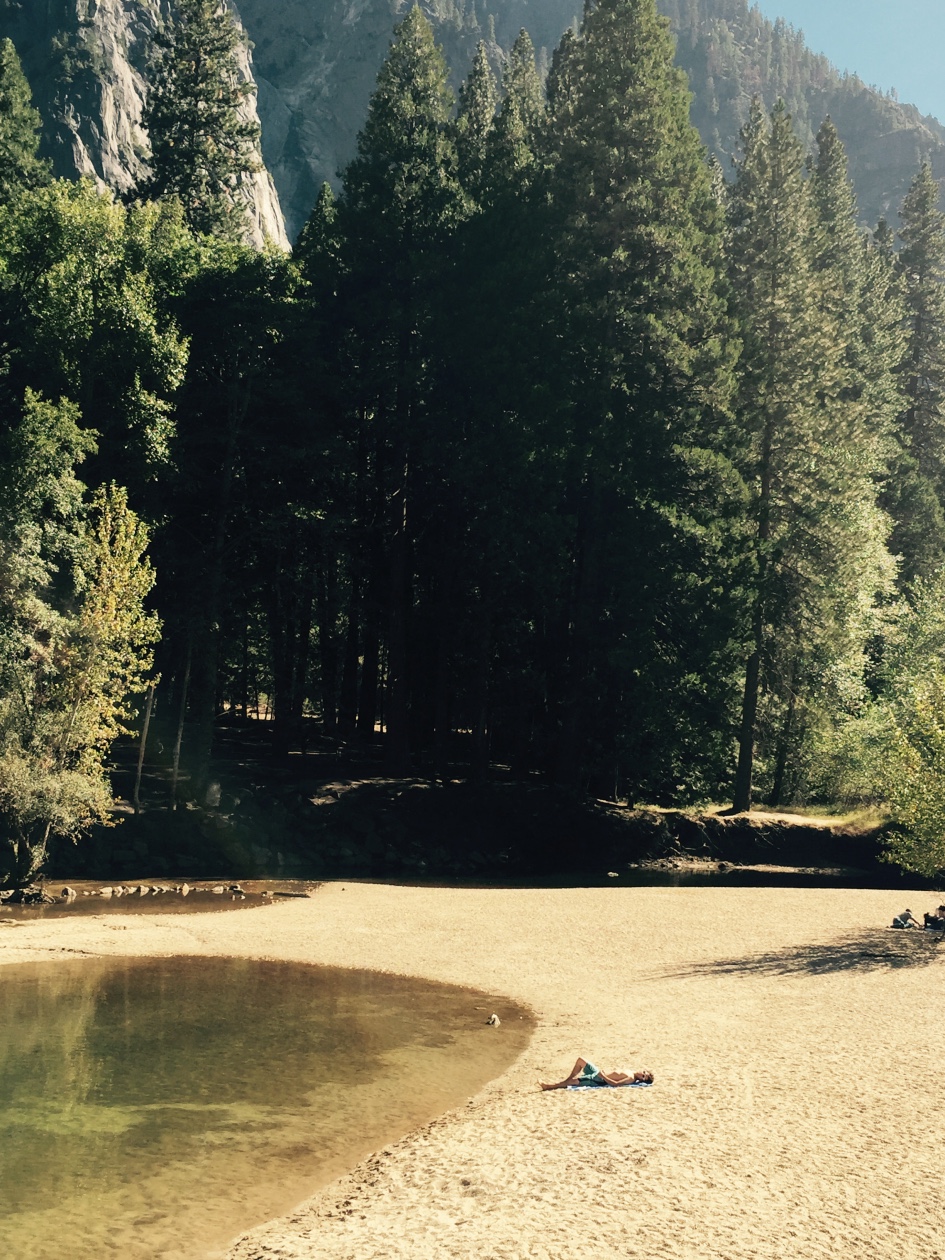 I met Rob Mooring in 2012 when we did the East Buttress of El Cap (5.10b, 13 pitches) car-to-car in 8 hours, but haven’t seen him since, though we’ve stayed in contact. I was super psyched when he reached out looking for a partner. He sent me an impressive list of big boy climbs, stacked with 5.11’s and 5.12’s. In the end we decided on a Tuolumne link-up of three routes, On the Lamb (5.9, 4 pitches), Oz (5.10d, 4 pitches), and Hobbit Book (5.7, 4 pitches). Despite the pitch count, it turned out to be a very laid back day. We had a leisurely morning while waiting for the rock to warm up and finished the day just as the sun was about to hit the horizon. Pretty chill. Rob took the 5.10d slopey face pitch on Oz and I took the immaculate 5.10c dihedral pitch. Rob’s pitch was awkward, insecure, and hard for the grade, but he crushed it like a boss. My pitch was the reason people climb this route, a clean laser cut crack in a slightly overhanging dihedral for 100 feet. I was pretty pleased with my on sight. After that Hobbit Book was type 1 fun all the way. We simul-climbed the 500 ft route in just under an hour. I led the entire route as a single pitch, which was fantastic! 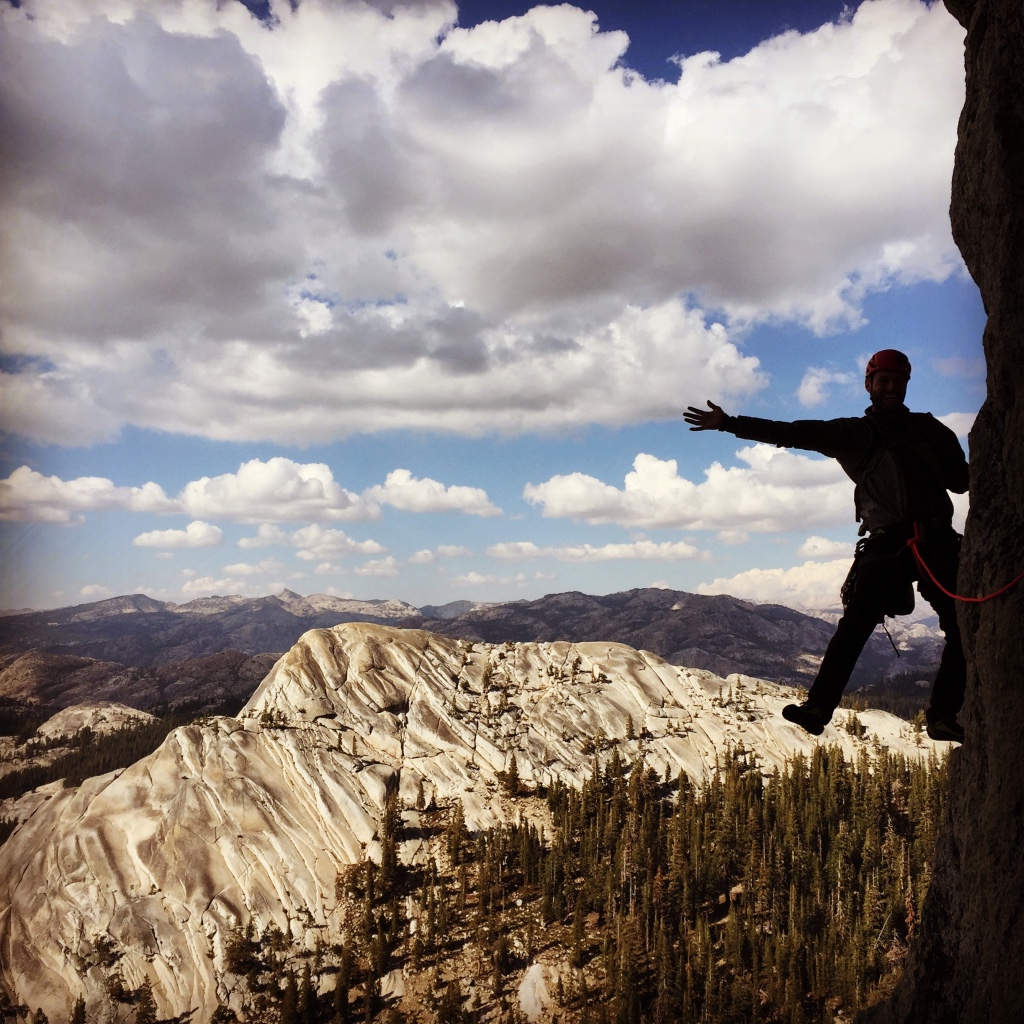 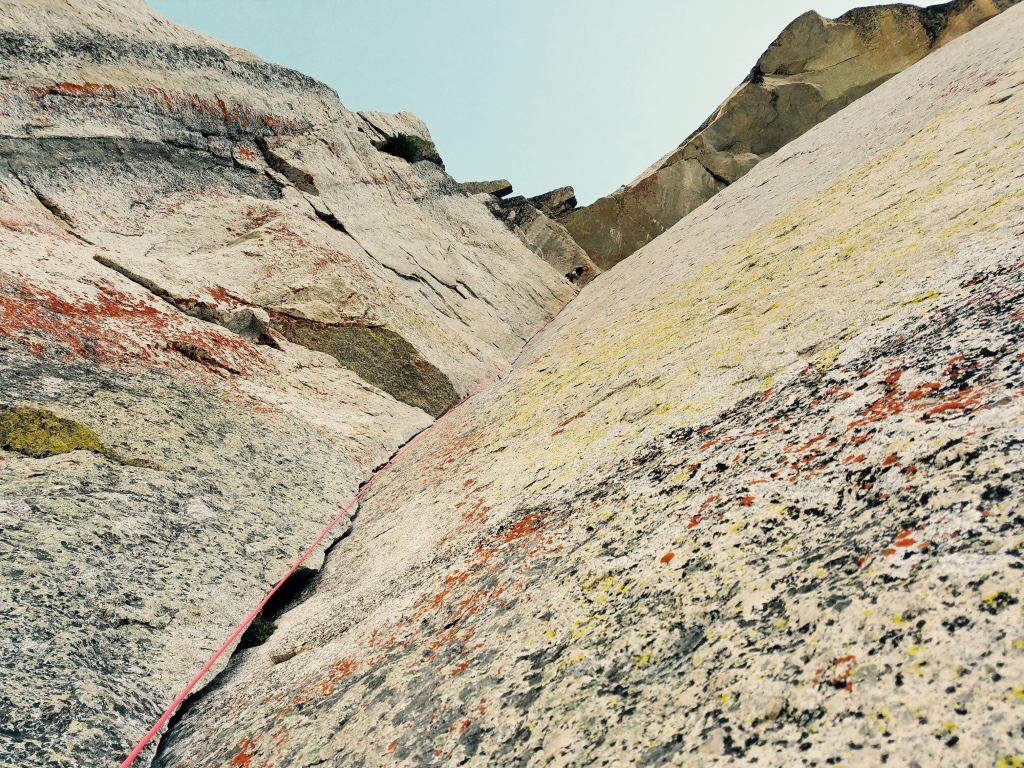 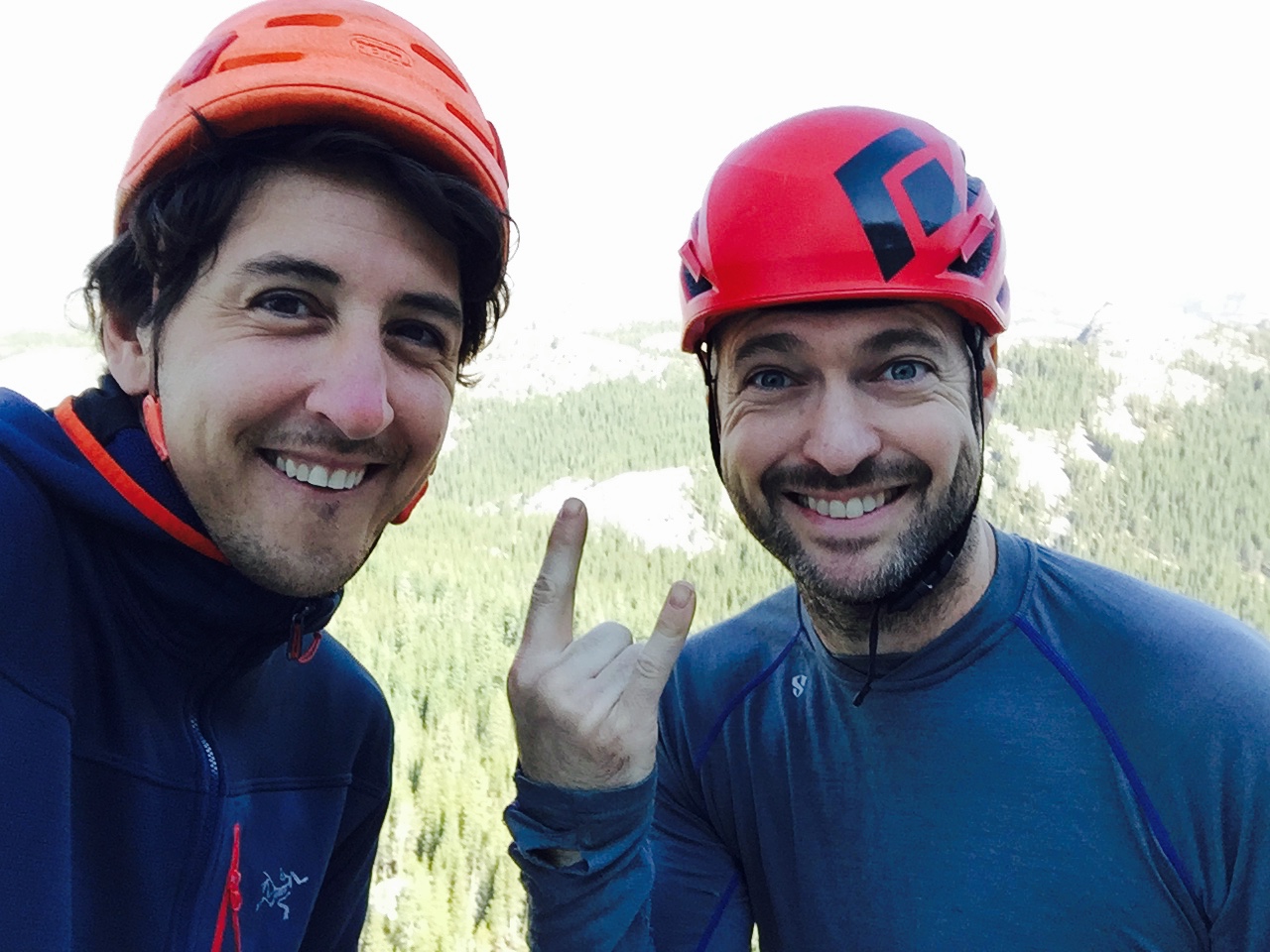 At this point I was getting ready to head out of the valley for a bit, but suddenly found myself with two more partners. I met Aili, a mountain guide out of Jackson, WY at Housekeeping while doing laundry and we ended up climbing the Kor-Beck (5.9, 6 pitches) on Middle Cathedral. I also got a good day in with my friend, and former Bostonian, Brooke Schuemann. We did The Grack (5.6, 3 pitches), a classic that I somehow missed in all my time climbing in Yosemite. 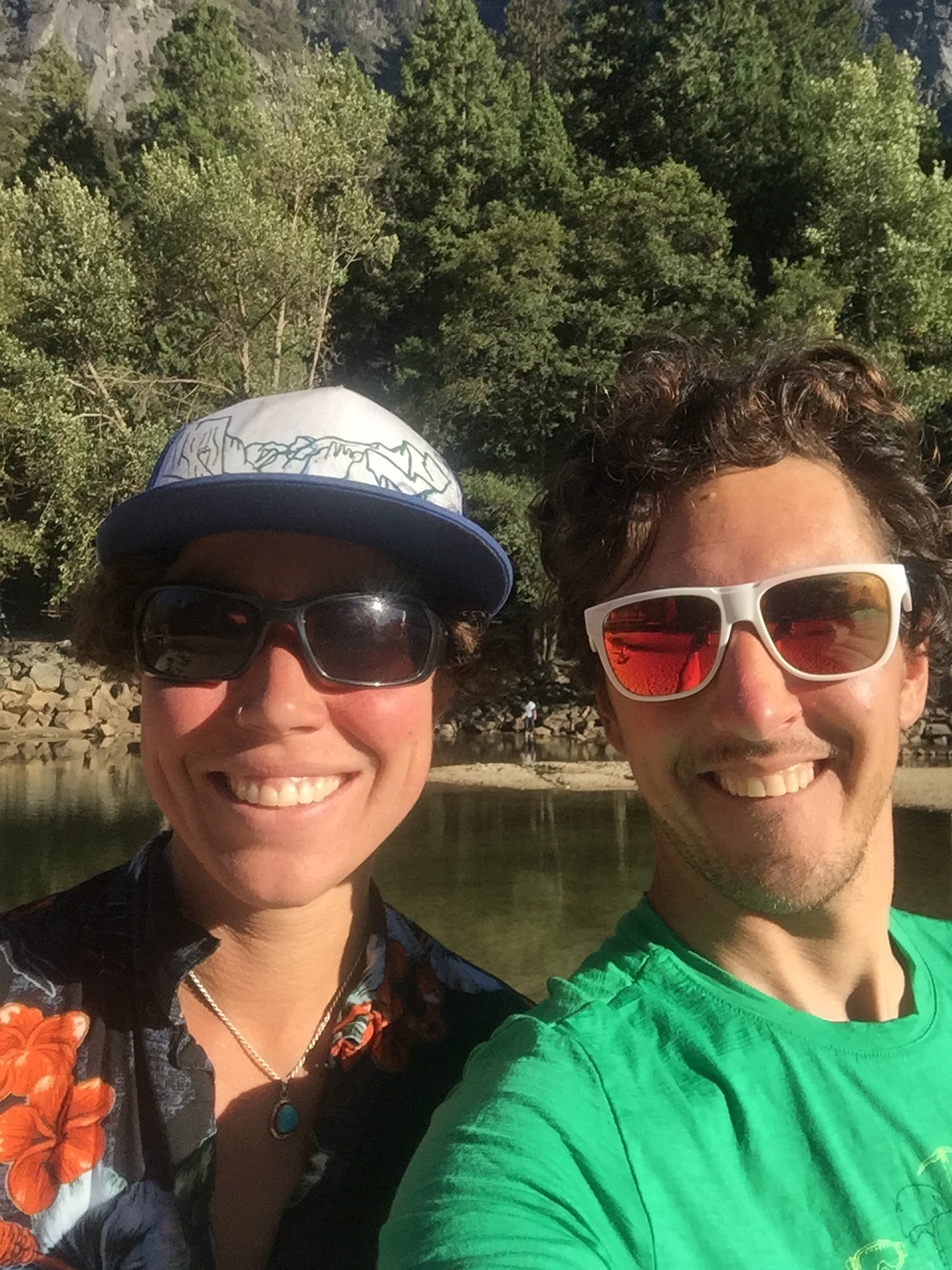 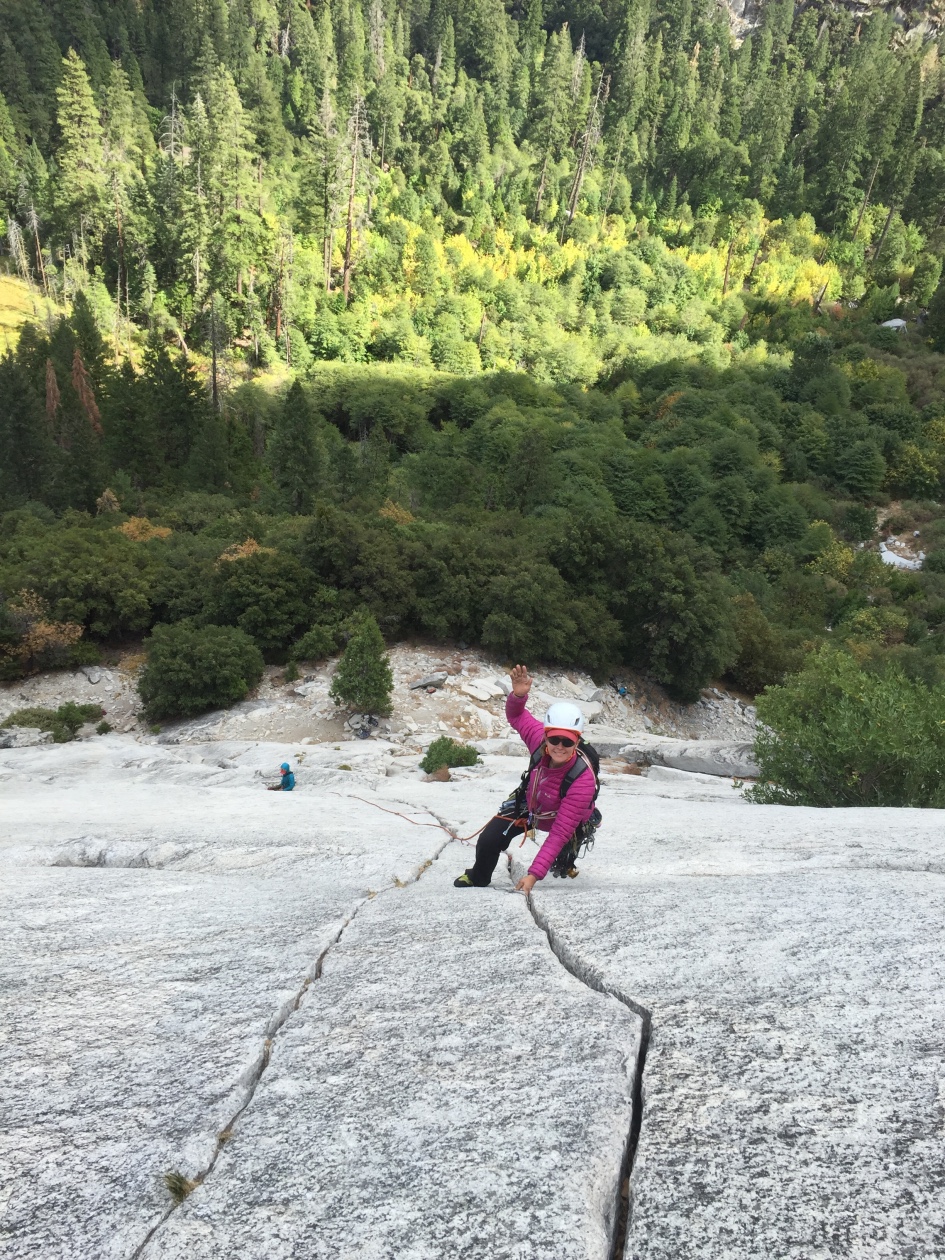 Although the rock climbing was fantastic, I was starting to weary of valley life. With the exception of a few nights that I got to stay in Upper Pines with Alice Ting Chiang and Maureen Petterson (which was awesome), most nights slept outside the park gates at El Portal, a 13 mile drive each way. Internet is spotty or non-existent in most places, and driving the loop road gets old after a while. It’s also surprisingly dark in the Valley at this time of year and the big walls which surround you lead to a certain sense of being closed in. I needed to seek wider pastures for a while and the warm sunny beaches of southern California were calling my name. So long Yosemite, I’m off to the next adventure! 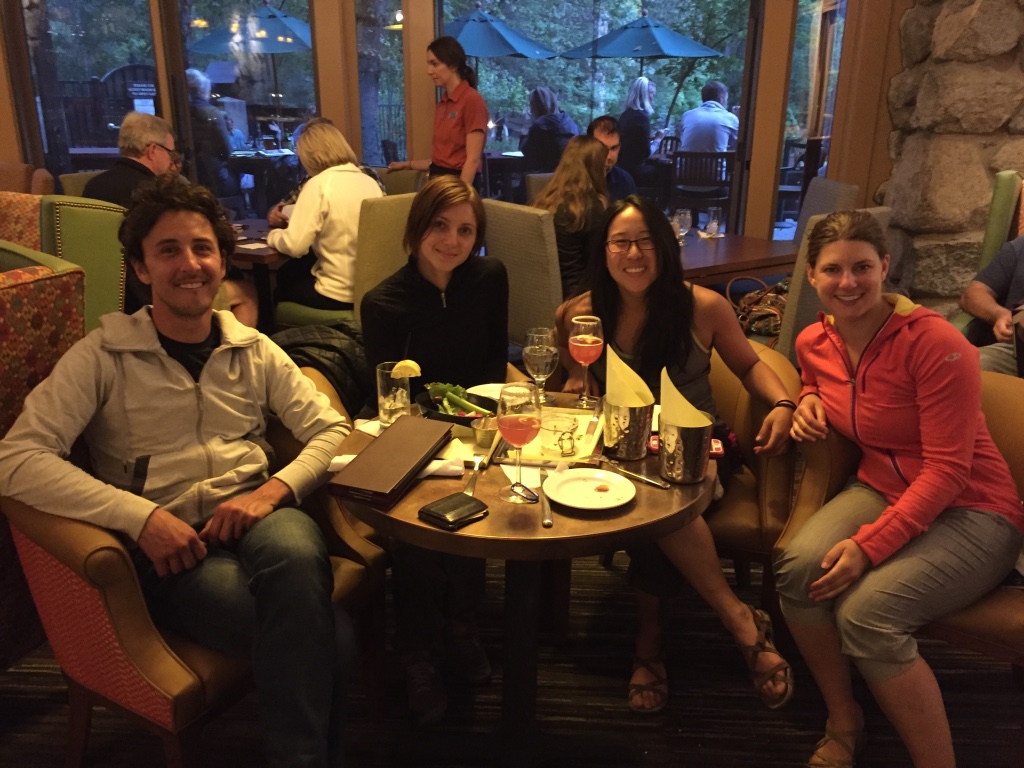